What is wrong with this picture? A road trip part 8. 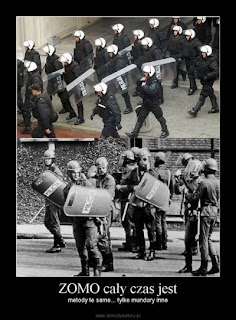 Image source.
Over the border I drove and up into the deep black of the M74.

My mind had a little wander over a conversation I’d had recently which turned on the recent student protests about tuition fees being introduced in England. My co-conspirator was not overly chuffed when I remarked that student riots and protests are where the future political leadership of the west gets recruited. Sarkozy anyone? How about proto wean shagger Cohn-Bendit? Why do these fools always pick on some weird, corporation friendly, inhuman and decidedly dickhead issue with which to cause trouble? Answer, they are told to.

Notice they never, ever want for a square meal, comfy bed, fine wines or hydraulically augmented sexreceptical with tentacles.

Why do our leaders, reps and elected officials always end up being perverted degenerate perps? You know the kind of bitchboy or boybitch you would not trust to boil a kettle never mind look after your children. Never mind your nation.

So, London student protest= MIHigh/NGO recruitment opportunity. Now that TPTB have recruited enough new blood after 50 years of nit picking recruits from the student body there is no futher use for education in England. So the whole process, 200 years of working class struggle is to be killed off using the oligopolist’s favourite tool. The rigged market.

Climbing higher into the night past the artics I remembered I also related to my chum that a mutual friend was thinking of sending her two children to Germany for tertiary education because the square heads had got rid of their fee structure. Now I was safely over the border, I mused about that. Would the youngster asleep in the back of the car fancy getting her tertiary education outside England. In Scotland where the fees are waived for the aboriginals and descendents thereof? Well that is a little way off and there is a lot of criminal political activity to negotiate before that day dawns. Plenty of time for the politikokrims to burn all universities down or hand them over to Brazil, Saudi Arabia or Indonesia.

Then it was off the M74 and down the Irvine Valley along the A71 and that was when something strange to my eyes, of course all explained now, evidenced.

I think I got a flavour of what it must be like to live in Zimbabwe. The little towns had SNP placards attached to municipal street furniture. Nothing else. No Labour red to be seen. No Tory blue. No LibDem whatever.

We now know that the plan of the RCE/LC to detach itself from UK land mass is proceeding apace. So there is no surprise that there is a foundation bitchboy heaving around looking pleased with himself. Here is Maximum letting it rip about exIRA hardmen, foundation playpieces, earlier @11mins. So Alex, the Scottish First Minister won’t be raising any anti bankster legislation and booting the fuckers into touch, will he? You won’t be asking pointy questions like “What the fuck does the IMF do apart from kill people by rigging markets and stealing peoples livelyhoods?” You won’t asking “Just what the fuck place do you foundation sponsored bitchboys and boybitches have poking your noses into our business? Fuck off!!” A true patriot would. But not you lot of super lauded and over regaled traitors. Bitchboys all. Bankster boybitch clones and deadheads.

These clowns will argue about and kill for every other issue, but not one will get to the nitty gritty because they are all bought, compromised, thick or scared shitless.

Anyway that then gets me to the AV vote in UKplc. AV was booted into touch by UKplc voters last week. The shock of what happened after last May’s general election has brought some sense out in the UKplc voter. Too late MFers!!

You totally botched it 2010 and now you are going to pay the price. What did I warn about, what did I say? Why did I recommend the Rigourous Voting Method? AV is going to keep coming back until you vote appropriately. AV will bring the rabid belief systems into parliament and ensure that there is no way the British can ever take back their nation. That is what RCE/LC wants because IT IS GOING TO ABANDON BRITAIN. RCE/LC loves Alex and the SNP. Let Scotland “gain” independence. Into a satrapy answering to the EUSSR where the sex criminals and shitstirring commie fools blow our money on the high life of tax payer funded degeneracy. Scoring lines of cocaine from the naked bodies of specially imported sacrificial pneumatic ladyboys. Oh yes who do you think turns a blind eye to all that?

You and me? Or a bunch of compromised scum hauled out of the arrest line at a so called student protest?

No one gets caught human trafficking. No one gets arraigned for destroying all the wealth that our forefathers created and fought for. No one gets their collar felt for stealing all the world’s money. No one gets brought up in front of the beak for slaughtering innocents with cruise missile strikes. No one.

However,if you buy a bucket of KFC in Barnet, 40 quid of fuel in Potters Bar and another 30 quid of petrol near the lakes, all in the space of 6 hours and suddenly the whole security state swings into action to make you a none person. For, next day, as I tried to pay for our tickets into Burns’ cottage we found out that the credit card issuer had reckoned we were hardened criminals making a break for the border. We were a threat to the state, high on chicken breast and zingers. Our profile flashed big phekking flashy thingys and klaxons sounded. Perps on the run. Card cancelled. One day UKplc when the AV is voted through and we are ignorant and poor serfs again our feudal masters look forward to cancelling our credits for raising an inappropriate eyebrow.

WTF did they think we were doing? High tailing it to raise the clans and march on London to stop the hitching of a bunch of Germans to a bunch of Redshields in Westminster? Would we have been left untouched if I’d struck a deal with RICO and set off with a couple of Albanian whores in the boot and a hard drug payoff for the cops in the glove compartment. Is that it? Act criminal?

What is wrong with this picture?

Well whatever it is, it is all our fault. We have allowed ourselves and society to become hopelessly delinquent.

It is time to start making critical judgments, and mistakes will be made, over small things. Gain mastery over seconds first. Then minutes, then hours , then days. Disengage from the stinking pit of machine, foundation, NGO sponsored politics.

Review the RVM and apply it in every occasion. Remember that their NWO is NOAHide, it harks back to a primitve age. Our NWO is forward looking and above all ours. We can build it slowly, bit by bit, day by day. Ignore the wankstators, concentrate on your own power and apply it independently.