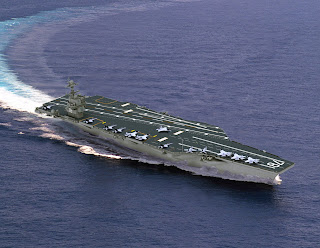 I am aware that there are many sides that are unappetising to the man JFK, but at least he wasn’t a lilly livered, great stinking streak of yellow Alinskyist piss. Nor was he awarded the psychopaths favourite peace trinket before he’d even done any killing.

The next USofA corp flat top will be named after President John F. Kennedy.
Huzzar!!!


The cost of these ships though is getting such that they are now more than just capital ships, they are crown jewels.

If USofA corp ever names a ship, no matter what type, the USS Barry Soetoro AKA Barack Hussein Obama then they might as well burn the constitution and torch the dump.

It truly beggars belief that the foundation bitchboy from Kenya, via Indonesia, spawn of a communist mare and a slob has his traitorous arse parked in the White House. He is a complete waste of space, a liar, a killer and supine spineless. An empty vessel into which has been decanted the virulent AGENDA21 pox for dispersion amongst the HAS.

Almost 50 years since Kennedy was gunned down, for not being a bitchboy, and the world’s most succesful country in 1963 has been turned into a total Alinskyist shit heap. Decade after decade of Internationalist place men draining the country of its independent future under the guise of democracy and civil rights.

Civil rights!! Any thing given to you by an Alinskyist will lead to your death if you do not comply. You are bought and paid for like slaves. All those years of kidding on they were freeing the slaves and tearing down so called barriers, all to make everyone living in USofA corps 100% bankster slaves.

These religioKriminal clowns cannot stand free people, they hate us and they will use every trick and any length of time to bring free people into the stinking heathen gulag. What is it about fredom that they hate so much? Well free people can tell them to go get to fuck. I mean straight to their faces, they really hate that. You are to have no choice in their desired world. Freedom also makes their ceremony untidy and ritual unpredictable. These simple minded, RISC’d fools, cannot stand variety, they need a monoculture of sterile drones guaranteed to react as per the sacred script.

What ever their mouth pieces say to us you know the exact opposite is the case.