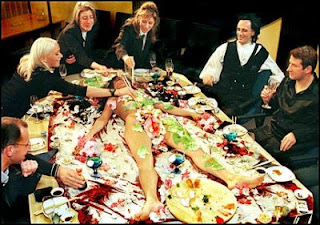 How many Alinskyist, inclusivist, multikulti, egalitarian, vegetarian, quota’d, diversitied, eugenicist, feminists do you see in these kinds of pictures? Told you it was all a load of whorseshit.

I have something to say and I know how to say it.

If you’ve a lot of time on your hands this evening have a swaatch at the two linked items at the end of this sign of a meal well digesting.

We are once again reminded of one of INCOMING!!!!!!!’s almost 2iC moments, when in the midst of nervous parents and peculiar youth he did let fly the following “powerbelch”.

“Has anyone of us wondered after all this time, all these decades, all the flown century, that after all the mental energy expended, all the nervous twitching suffered and all the cheating games endured. Has anyone wondered why after all the cash and all the misery to get into these top schools, that their output, their product are singularly incapable of doing anything other than the djinnn’d bidding. Has anyone wondered why, after the massive expense and even more massive stroking of G-spots that those who leave our esteemed business schools with the fake academic rigour and even faker fakir faculties, why are they incapable of ejaculating no more than spreadsheet jihadis in a casino. Do they think themselves alchemists? In other words why are you trying to put your children into institutions that are cleary producing failures. Failures that are turning the world into a slave camp?”

If you and I can see that money does not exist, that there is no such thing as profit or loss, that business ethics is just a way to salve your conscience in the murder and theft of our lives. If you and I can see that if you are tasked with conjuring your cashflow to produce that wonderful profit figure, which is to be spent or invested as you like, then why oh why is it not as plain on the nose on your face that whatever capital you start with is immediately handicapped by the then current interest rate of the funny money making hokeuspokeus?

Instantly 5 or 10 or 15% of the fuel of your business is secreted away. Leaving you the thankless task of doing over any other actor/partner in your business links. Is it not striking that today when everyone works so hard, indeed cannot get away from work, that there is nothing for the 99% of the persons engaged in the so caled economy and yet riches unbounded for the corporate person and charities.

Charities, I hate that word. It means removal from the commonweal for the enjoyment of the solitary sacramental mentalists. It means theft. It means parasitical. It means death. They are one of the ways that the unbroken chain commands our lives down the millenia. Wherever you find a charity you will find the djinn sucking out the lifeblood of day to day intercourse. A charity fronted by the corporate person.

Most will have a vague idea of what goes on in the RCE/LC. Abandoned once by the djinn and then reclaimed formally after 1500AD.

I’ll explain a bit more for those who are not familiar with its intricacies. RCE/LC is a protected pirate base which employs highly educated, from the best schools, business schools and colleges, sacramentalists to remove wealth from those who by dint of good fortune or dilligence are in posession of such a thing. It also has a role in stealing the future from those as yet unborne so that none may come into wealth. How are these people rewarded for their dedication?

In the most modest of ways of course and befitts sound business practice and ethical commerce. There are after all laws governing this place.

Ah yes, but lawful and ethical does not a stinking rose make.

Have you ever seen a load of sniffer dogs at work in the RCE/LC, especially drug bust dogs? Of course not because the blow beagles would go absolutley mentalist. The poor buggers wouldn’t know which way to run and they’d suffer premature nasal burnout instantly. RCE/LC has it’s own plod. Now I know that some of you are going to swivell your eyesafter reading the next few lines however it is the truth.

That means that RCE/LC has it’s own version of the Saudi, wahabiist, religious police deployed. And you wonder why Sharia law is coming to the hamlet’s ziggurat near you? These religious police are in place to protect the precious assets of the pirate base, it’s personnel. The people recruited by the RCE/LC are the kind of clowns who take our money, piss it up the wall, the kind of people who want to lay a ladyboy down and snort cocaine from out of his bell end and suck pork scratchings out his starfish, the kind of morally vacuous fools that live in Marie Antoinette’s toy farmhouse’s playhouse and dolly rooms, the kind who are designed to destroy and remove wealth. For as soon as they have enough of our wealth in their hands, each cycle, their coven sinks the economy and starts a war to bring about terminal amnesia. Despoilation of crime scene.

If you think that is an exageration then you have not been keeping up with current events.

France Telecom had to stop firing people because of all the suicides it caused. If you watch the Deming video you want to get to the part with the red and white beads. Sound familiar? That is the mighty deeds of the MBAs that infest our business entities. They are still waging war 70 years after the war ended. There has been no peace. The financial weapons systems have not been stood down. Look at the two economies that were taken out by the djinnwars, Japan and Germany, worked like slave plantations. Occupied by djinnoverseers. It is no mistake the BAOR was parked in Hessian lands. The war is endless and it’s greatest weapon of mass destruction is the abacus. It’s greatest achievement the hypnotising of it’s footsoldiers by mass entertainment.