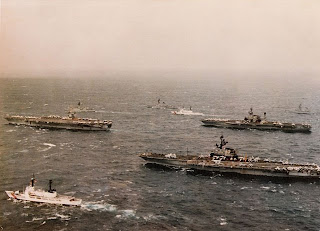 I remember holding my breath and watching this unfold. Two strike carriers and the Big E stick their noses into the bear’s eastern lair. Coast Guard cutters as well. They all came back safely.

In case you’ve forgotten this was the age of shootdown, the next year. A very dangerous age indeed and the MSM kept us shitting ourselves. Though we didn’t know it there was never going to be a shooting match, no gunfire and sniper. The real aim of banksterism is not profit, for that depends on money, which does not exist. The concepts of money and profit are used by the banksters to reunite humanity under the one sun again, in an age of darkness. Slavery. Just like it used to be.

Whilst the ships ploughed and the airtravellers died, the panda squeezers got busy preparing the ground for a massive injection of funny money into ChiComm land, 500 years in the making. And after funny money comes the queueing theory.

In 30 years the great engine of freedom has been ratted out by the internationalist slavers. The slavers who like to hide away in gated communities, ghettos, because they are so much better than the rest of us. They hate our freedom. They and they alone, must drive the dusty donkeys for the priesthood. 30 years of theft and larceny, all unpunished. All ethical. All legal. All donkied. Yet the great giant of freedom takes the punches, drunk though it is.

The USofA corp has become an obstacle to the new shiney toy of the internationalist gangsterskanksterbanksters. The new, secure, base of operations is RCE/TA and the old theatre towns are obsolete. Just parks to park their retired useful idiots and families in the battle for EurAsia. Zbig really is an idiot.

Watch the floating legions. When three get together with a gated community squatter at their head wave them goodbye.

There is a Varian moment coming. This is not prediction, just the way these adepts work the crowd. Like a bloody bait and switch.

A real destruction of the legions this time because the ChiComms are at last up to speed with all our stolen tech. and pensions.