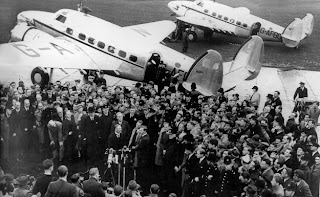 I know those of you who come here regularly must, if U R not then UR as mad as a box of crack addled incontinent skunks getting airfreighted Ace Ventura UPS stylee and as one of my childhood favourites would say, be asking yourselves “OK INCOMING!!!!!!!. Apart from your delusional bent, just what is there out here that would tend to lend credence to your master masonic map hypothesis?”

Fair question and fair play to you making it this far and so I’ll break this wandering and approach the bomb line thesis indirectly. I’ll give you two examples from which we can deduce that there exists some sort of secret map. Propaganda as truth as lies and then a little something from one of my favoutire USofA corp fellow wonderers.

The first example I would ask you to consider really boils down to the complete and utter arsebark that comes out of our politicians’ mouths at every and all opportunities and especially the grand ceremonial occasions. Not ceremonial as in Troupeing the Colour, I mean “ceremonial” as when the magikians behind the scenes are pulling one of their Herd Attention Space shaping spells.

I ask you to cast your mind back to a warm September day when this heaved into our ken.

You must by now know that he is the same geezer that brought us this magical unforgettable marionette vignette. Yes that’s him in the photee at the top of the page. I’ve seen that thing so many times since I was a boy and I still remember the first question that formed in my mind when casting my peepers on it for the first time. “Why’s Chamberlain clambering out of a Yankee bird?” You’ll only start to answer that one if you realise that there are perception warlocks at play here in 1938.

Did you catch the short announcement he gave that September day so long ago now and yet the ramifications of what he really was thinking as he said those few words need to be clearly stated. So I’ll switch on the Babelbolloxphish and give you my interpretation with the secret map in mind.

“Hello scum, the guys I report to have told me that it is now a propitious moment to kick off a really, really big one. Long planned, I know some of you feel that way, so I’ve been directed to give you a cover story. We need to stop the Bosch or every kitchen appliance in your home will be Krautischer.

Of course what you don’t know, because I’ve seen a map, is that after all the trouble we are going to go through, rationing for over a decade, dead men, women and children in our streets, don’t worry it isn’t going to be as bloody for us as the War to end all Wars, we are going to hand most of Europe, apart from the good wine growing areas, over to Uncle Joe Stalin.

I cannot dare tell you this because we know that you know Uncle Joe would really like to take you all into Epping Forest, apart from the 5th columnist here, and get his NKVD, OGPU and homicidal Commie aparatchiks to give you all a severe doze of pain relief from the Red Lead Pill Pharmacy. If you caught wind of this aspect of the plan then I’m sure that at this moment you’d be a tad reluctant. We might need to pull a special operation and bomb the tube system using some of our tame Mosley's black shirts to get you in the correct frame of mind. What even the red 5th columnists don’t know though is that they are useful idiots and would get drafted into one of the shtrafbaty. If nothing else they would manure the trees and plants where ever they fall. I bet you didn’t know that Herr Hitler and Uncle Joe are very, very concerned about the environment, did you?

As I said this time there won’t be so many dead Britons to get buried. Not because we are going to get a clever plan together to minimise the blood shed, but because unlike in the last show we are going to stick to the 5% rule that the men I report to have applied to our society for centuries now. Only 5% of our society are needed to keep this base of operations going, so only 5% will ever get housed, fed, educated and travelled well. 95% are to be tolerated, know your place. With that in mind we are going to use strategic bombing as our primary war fighting method. That will minimise casualties so you won’t torch the home front where my bosses have peaceful estates, we will ration food in a seemingly fair way, again my bosses don’t want hordes of starving proles teeming all over their lands looking for food, there will be plenty of work since the factories will be running 24/7 churning out our chosen weapon of war, again you’ll be too tired to riot if things go pear shaped. Finally the whole jig will befuddle you so much you won’t know you are being displaced decades after the war is over. As I said you lot are tolerated. Know your place.

Perhaps it is best that you rest in ignorance peasants. I have heard a whisper that the boss who my bosses report to has decided to commit an atrocity so guargantuan, that it will make the planned starvation in the Ukraine a little while back look mild, engineer a barbaric act so appalling that there will have to be a quarantine organised for the Eastern Part of Europe to keep the act secret and out of our common knowledge for at least a half century. That is why Uncle Joe will soon be our bestest friend, despite the fact that he wishes us all dead. We are part of the planning for this genocide. I have been given my orders.”

Now that is how I read history. It is a bankster view. Something very hard to get your head round because we have no money. However if you have all the money in the world and an ancient apparatus through which to make things happen in the grand scale then it is easy. I don’t need to do anymore than ask you to look through history and see all the lines drawn on the map that have kept two neighbours ignorant of the other because a third truly internationalist group of bankstergangsterskanksters have pulled off a massive crime against humanity.

Another one is coming. There will be an engineered quarantine across the Med soon.

The second little item requires no imagination from your correspondant. I love the way so many different threads intertwine in this article. Go on read it. It tells me that someone has let it be known throughout academia, and boy is USofA corp academia Soviet and COMINTERN, that certain things are not for discussion. Someone has seen a secret map.

So with that all in mind I’ll wander back to the ziggurat line which I highlighted a little while back. Again as I said at the time, above the ziggurat line everything got blasted to hell and back. From Hamburg to Stalingrad, everything got levelled. Below the ziggurat line it was all open cities and don’t ruin the architecture. Oh, except as I pointed out, Monte Cassino. I gave the reason then and I won’t change my mind on that, the Vatican wanted it snuffed out.

So with the line separating north from south in the destruction stakes I also detect a line separating West from East. The creation of this line was our primary responsibility in the big one.

If we get back to the practice of shooting down large numbers of UKplc heavy bombers then the sneaking up on the blind side of a fully bombed up Lanc or Halibag and pumping 30mm shells into the fuel tanks and bomb bay seems a good way to go about it. So, all unnoticed like by anyone back at BCHQ, that is what the Krautischer did. They would get into the bomber stream, jiggle up the underside of the bomber, pull off a non deflection shot into the blind side with their upward firing cannons and head onto the next one. No one noticed it seems. Or someone didn’t want the subject of improving our bombers' self defence capability mooted.

What would such a process have entailed. Well for one it would have verily fucked up the execution of the bomb line. Why? Three reasons cost, interuption of production and totally knackering of the armament payload fraction devoted to blasting the ground with HE.

That last one was the primary consideration I’ll bet. Sweat the assets until they die.

Let us have a comparo then to illustrate what I mean.

B17 v’s Avro Lancaster. Roughly same dimensions, power output and all up weights.

Mmmmm.. makes you think doesn’t it? To get a similar bomb truck from Yankland we’d have had to get some B29s involved. No B29s ever served over Germany. That’s because it has a different mission. It was to set Japan on fire from far, far away. We had the Bomb Line and the USAAF 8th had the counter air mission.
Posted by INCOMING!!!!!!! at 08:10